Amazon’s website and app was down for thousands of frustrated shoppers Wednesday morning, December 7th. When this happens, many shoppers might be left wondering, “Is this issue only happening on my device?” and take to Twitter to voice their dissatisfaction.

So, why might this error happen and how much will it cost Amazon?

Nick Paladino, who leads the Solutions Engineering Team at Blue Triangle, experienced the friction firsthand on the Amazon Check-out Page and wanted to uncover these answers as well.

Did Blue Triangle see anything on our end?

In short, yes! While Blue Triangle doesn’t have direct Amazon insights that we can share, Nick did see a correlation among several customers that were impacted at the same time.

“There was likely a backend checkout dependency that went down,” says Nick after looking at the data in the Blue Triangle platform. “We noticed that several customers hit high Time to First Byte which would imply that backend systems failed during the same window.”

Time to First Byte indicates the responsiveness of a webserver, specifically the time between the browser requesting a page and when it receives the first byte of information from the server. When first byte is slow, all metrics are linearly just as slow, such as Largest Contentful Paint (LCP), which impacts revenue.

How much will this outage cost Amazon?

Typically, during incidents like this when there’s an outage and slow loading pages, Blue Triangle sees a downward trend in page views, orders, and revenue. For customers, Blue Triangle can quantify the cost of revenue-robbing friction, and it can be an unbelievable amount. 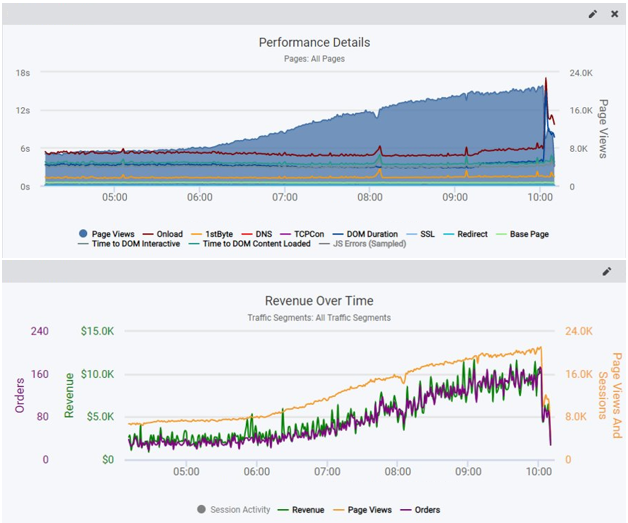 The above screenshots are examples of what Blue Triangle has seen from other sites when there’s an outage. Although its not from Amazon’s outage today, its representative of the potential immediate revenue loss a retailer and eCommerce site can experience when its site goes down and consumers are unable to complete their purchase.

“There is also a concept called bounce back after an outage ends, which is the tendency for loyal customers to come back to the site and still convert,” says Nick. Even though Amazon is known for providing frictionless experiences and likely usually has good bounce back numbers, friction of this magnitude would result in significant loss of sales that will not be recovered.”

Bounce back behavior of any retailers’ customers will be unique to that retailer, just as customer journeys and sensitivity to page speed is unique. Which means Amazon’s shopper behavior will be a distinct metric to Amazon and requires gathering of their customer data to measure its impact, similar to how Blue Triangle collects this information for its customer to provide real-time customer journey insights.

In Nick’s experience with numerous retailers, however, most shoppers do not return to checkout after outages, which drops revenue down by approximately 60-80% during the incident timeframe compared to a non-incident after adjusting for bounce back.

“Online competitors are only one click away,” says Nick, “so whether you’re Amazon.com or another retailer, it’s important that shoppers begin and end their journey with you. Friction gets in the way and comes at a shocking cost.”

During the holiday rush, every shopper matters

Optimize the customer journey before the eCommerce event of the year.

The Unbelievable Cost of Friction

Blog
Adam Wood
The True Cost of Friction Will Surprise You Imagine a website that takes too long to load. And let’s be real. We don’t have to imagine too hard. It’s something most of us experience every day. It’s a

Blog
Adam Wood
New year, new trends that you must know for a frictionless 2023 Last year, with inflation and fears of a recession, every customer mattered. This still rings true in the new year. Facing new challenges and

Blog
Adam Wood
Black Friday 2022: The Fastest and Slowest Retail Websites Black Friday 2022 online sales are projected to grow by just 1% year-over-year at $9 billion, according to early estimates from Adobe. With $8.9

Blog
Adam Wood
Thanksgiving Day 2022: The Fastest and Slowest Retail Websites It’s no surprise that many consumers would go online to get their holiday shopping done. Since the pandemic accelerated online adoption, eCommerce