In a tight game between the Los Angeles Rams and the Cincinnati Bengals, who came out on top as the Super Bowl LVI Champions? While the Rams took home the Vince Lombardi Trophy, there was another competition playing out off the field. We’re talking about the brands who advertised during the Super Bowl and received the biggest bump in internet traffic.

Before we break it down, let’s also note that advertisers aren’t the only ones that experience an uptick impacting page load times. Take a look at the Page Load Times for some of the largest sports websites in the world leading up to game time.

Now, onto the commercials!

The ad landscape was dominated by several industries, including Food and Beverage, Financial Services, Automobile, and Tourism and Hospitality. We saw several notable brands suit up for game time, such as Amazon, Anheuser-Busch, Booking.com, Budweiser, DraftKings, Expedia, General Motors, Meta (formerly Facebook), Pepsi, Pringles, Salesforce, and many more. In fact, the game featured nearly 70 commercials. In case you missed them, you can watch every ad in under two minutes here!

Across industries, let's take a look at some of the advertisers ranked by Page Load Time, and secondarily by Time to Interactive (TTI). TTI measures how long it takes a page to become interactive, whereas page load time is simply the average amount of time for the page to appear on the screen.

Of these select companies, Expedia experienced the highest page load time on Super Bowl Sunday compared to other select advertisers. Interested in this competitive comparison? Check out the Blue Triangle Industry Benchmarks!

This year, 30-seconds of airtime fetched as much as $7 million in some instances. With 36 million US households and more than 112 million viewers tuning in, brands must anticipate a spike in website traffic in response to their costly ads.

When interested customers claim a promotion online, check out a product on a brand’s website or perform a search engine query after watching an ad, companies must ensure their site is up and running to capitalize on this boost in traffic. So, what is the web performance impact of Super Bowl LVI commercials?

While there may not be an immediate increase in digital sales following the airing of an ad, there is a real-time spike in web traffic and online searches, with online word-of-mouth increasing as much as 68% on Super Bowl Sunday.

This year, many brands put their best foot forward and there was an undeniable focus on both nostalgia and digital technology innovation. Perhaps the most attention-grabbing Super Bowl ad that leaned into both was Coinbase, a cryptocurrency exchange platform.

The Coinbase commercial featured a bouncing QR code (Quick Response Code) reminiscent of early computer games or DVD icons moving across a screen. By scanning this code with their smartphone, users would land on a promotional webpage on Coinbase’s website to take advantage of a limited-time offer.

However, due to the massive influx of traffic generated by the ad, more than the company has ever experienced according to its Chief Product Officer, the website experienced an outage. While brief, the site crash does raise questions about a website’s stability during times of peak traffic. It is critical for companies to manage, measure, and optimize the customer journey in real-time to ensure better business outcomes.

While the Los Angeles Rams emerged victorious, so did many of this year's Super Bowl commercials! Attracting more viewers than the previous year, advertisers' websites that aired during the game were more likely to see an increase in site traffic, leading to a potential uplift in conversions, but also susceptible to poor page performance without the right tools in place to monitor and manage the digital experience.

Web performance and speed directly impact user experience and revenue. Here at Blue Triangle, we quantify where and how much page speed impacts online businesses.

During the holiday rush, every shopper matters

Optimize the customer journey before the eCommerce event of the year. 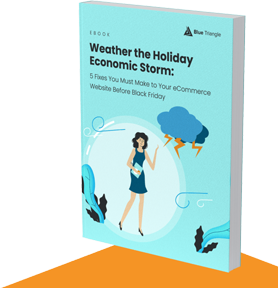 The Unbelievable Cost of Friction

Blog
Adam Wood
The True Cost of Friction Will Surprise You Imagine a website that takes too long to load. And let’s be real. We don’t have to imagine too hard. It’s something most of us experience every day. It’s a

Blog
Adam Wood
New year, new trends that you must know for a frictionless 2023 Last year, with inflation and fears of a recession, every customer mattered. This still rings true in the new year. Facing new challenges and

Blog
Adam Wood
Amazon and the Unbelievable Cost of Site Outages Amazon’s website and app was down for thousands of frustrated shoppers Wednesday morning, December 7th. When this happens, many shoppers might be left

Blog
Adam Wood
Black Friday 2022: The Fastest and Slowest Retail Websites Black Friday 2022 online sales are projected to grow by just 1% year-over-year at $9 billion, according to early estimates from Adobe. With $8.9

Blog
Adam Wood
Thanksgiving Day 2022: The Fastest and Slowest Retail Websites It’s no surprise that many consumers would go online to get their holiday shopping done. Since the pandemic accelerated online adoption, eCommerce