How to Optimize HTML to Boost Web Performance

HTML is the backbone of the internet. It is the document type that builds the structure of a website. Without HTML, JavaScript wouldn’t be able to run, CSS wouldn’t be able to style anything, and images wouldn’t have a place to load. The power of HTML lies in its versatility, mainly because it can load other files – which is what hypertext, the first part of HTML, means.

When HTML takes a long time to load, parse, and download external files, user experience can suffer. Page load times (Page Onload) grow longer, with more users tending to abandon the longer they have to wait.

There are many ways you can optimize HTML to avoid these outcomes, including semantic optimizations that vary based on browser type. These change over time because HTML syntax changes over time, and different browsers adopt the updates at different rates.

In 2014, HTML5 became the recommended standard by the W3C. Since then, we’ve gone through two version updates. As of December 2017, HTML5.2 is the current standard, and version 5.3 is in the works.

I won't be covering those granular optimizations today. Instead, I want to give you a deeper understanding of:

I’m also going to explain why these optimizations are recommended, which will get a little technical, so I’ve included an overview at the beginning of each section, and then a TL;DR at the end.

HTML gets delivered like any other file on the internet – over a network in data packets, which have limited room for data. Here’s what the process looks like:

10 TCP packets is equivalent to about 14.3KB. So if the HTML is larger than 14.3KB, it will take multiple roundtrips to deliver the base file. Ideally, you would be able to include multiple files in that first connection, like CSS with server push, in order to complete the critical rendering path in a shorter amount of time.

Reducing the size of the HTML file helps reach this goal, with two main ways to do so:

HTML Delivery Tip #1: Clean up HTML so it is concise

Following W3C specifications for markup makes HTML more maintainable and readable. The ones that reduce the HTML file length most follow.

Link to a stylesheet in the <head> of the document instead of using inline styles. The type attribute does not need to be declared so that the reference to the external stylesheet looks something like this:

Link directly to a JavaScript file instead. When a browser sees a <script> tag in HTML, it also assumes JavaScript, so the type attribute does not need to be declared. The script tag should be succinct and look something like this:

Mozilla recommends indenting with 2 spaces rather than a tab – the equivalent of 4 spaces – and only separating blocks of code with a blank line when there is a good reason. You can also use a tool like HTML Tidy to strip out whitespace and extra blank lines from valid HTML.

If you’re not compressing HTML and other files, your site is likely slower than competitors. 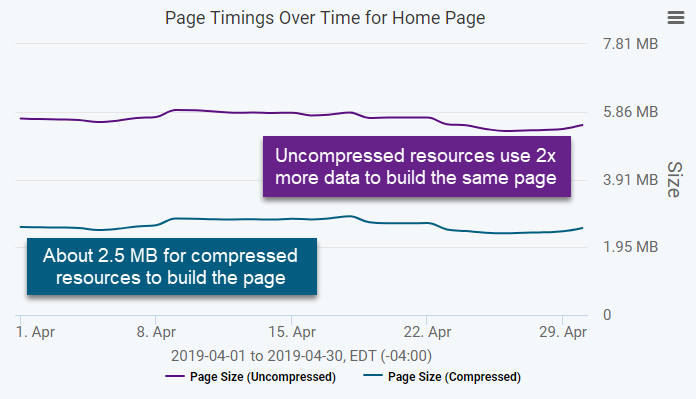 There are some kinds of optimizations done regularly to other files that are not standard for HTML.

Minification deletes all unnecessary whitespace and all new line characters, and is not common practice in HTML. While you can minify HTML if you wish to do so, it can make the document more difficult to read, especially if the page changes often.

Caching is not always used for HTML either, because HTML files tend to change frequently.

That being said, it is possible to cache HTML. Caching rules allow you to dictate where users’ browsers will request the document from – the cache or the server. Use caution, because you don’t want to serve up an old version of a website. Static HTML pages, like blog posts, can usually be cached without adverse effects.

Once the HTML document has been delivered to a browser, several steps need to happen in the background before anything shows on the screen. This is known as the critical rendering path – the minimum steps that the browser has to take before the first pixel displays.

The critical rendering path does not exist in a vacuum – it can be affected by the load order of the files that build a page. This includes, at minimum, HTML and CSS, but often includes JavaScript as well. For that reason, you want to load external CSS in the <head> tag of the document and load any JavaScript that is critical for styling or updating the content above the fold as early as possible.

For both critical CSS and JS, you can also use the HTTP preload and server push methodologies to get these files faster. CSS and JS are also typically static, which makes them excellent candidates for caching.

Load order matters between external CSS and JS files, too. Both HTML and CSS have to be parsed for the page to render. When the browser reads through – parses – the HTML, it goes from top to bottom. When it runs into CSS, the browser can start parsing it.

However, the default behavior of the browser when it sees a <script> tag is to stop parsing of HTML, download the script, parse it, and execute it. This is because the browser expects the script to affect the structure of the HTML, which in turn affects the way the page renders. It also means that if the HTML hasn't seen the <link> tag for CSS yet, it can't download the file until the JavaScript is processed. This leads to two best practices for JavaScript placement in HTML:

Finally, limit the number of files that need to load for rendering to happen. This can mean deferring third-party content that would otherwise load early in the page and slow rendering.

When a browser sees a <script> tag in HTML, it stops HTML parsing until the script is downloaded (if external), parsed, and executed. This is known as synchronous behavior because it all happens in the main processing thread of the browser. However, there are two attributes you can assign scripts to change this default behavior – async and defer.

The async attribute – short for “asynchronous”

The defer attribute – for deferral of execution

Downloading and parsing a deferred script is also asynchronous, taking place in a separate processing thread. However, a script with the defer attribute will only execute once the HTML is done being parsed, at which the point the document is considered ready.

Almost every JavaScript file should load asynchronously because asynchronous scripts do not stop HTML parsing. Note that you can only load JavaScript asynchronously or defer its execution if it’s called externally in a <script> tag. Use the defer attribute sparingly since it’s difficult to control execution order, and only when the script does not alter the rendering of the page.

Support for async and defer differs depending on the browser, but most browsers support both. When both attributes are listed in a script tag, the async attribute takes priority.

HTML Parsing Tip #3: Use valid markup and include essential tags

Valid HTML5 markup is specified by the W3C. They also have an HTML validation tool you can use to see syntax and style errors in your code. There will almost always be some errors, but excessive errors in your document should be a concern. Browsers rely on HTML standardization to read and understand what an HTML document contains and how to display it, but poor document structure and poor use of syntax can slow down how quickly the page can display.

To make sure browsers can easily read your HTML, you should:

Include essential tags and attributes.

The doctype declaration should happen at the very top of the HTML document, outside of any other tags and above the <html> tag. This lets the browser know what it’s looking at as soon as the page is delivered. For most cases, <!DOCTYPE html> will be appropriate, which defaults to the current HTML version. However, other doctypes can be declared depending on how the document will primarily be used.

Letting the browser know what language it’s looking at reduces errors in parsing and allows faster rendering. Use as short a language declaration as possible inside the <html> tag.

For example, if your document is in Japanese, you would write:

You can exclude the country code in this example because Japanese is only spoken in Japan.

Declare what character encoding the browser should use.

For character encoding, the current standard is to use UTF-8, which avoids the vulnerabilities of UTF-7. Character encoding is declared as a <meta> tag attribute within the <head> of the document.

Without declaring the character encoding with the charset attribute, the browser will not know how to read the file. For that reason, you should include the <meta> tag with charset attribute immediately after the opening <head> tag so that it is one of the first things the browser reads.

In summary, the beginning of the HTML document should include something like this at minimum:

Close all tags that require closure

In HTML, a few tags are assumed to be self-closing, called void elements. Most tags, however, require a closing tag. Although a browser can usually read HTML without closing tags, leaving tags open can result in disproportionately poor performance because the browser must construct additional DOM nodes to compensate for the nested elements.

An appropriately opened and closed element looks like this:

HTML5 includes new elements that are more specific to certain kinds of content. Using these descriptive element names gives the browser a more rigid set of rules for reading and styling the content contained in the element than using a generic element would. This can cut down on the number of rules necessary in CSS, as well as reducing redundant class attributes.

For instance, a navigation bar containing a set of links for the main navigation on the site can be denoted with the new <nav> element instead of with a <div> element:

Takeaways and the TL;DR

HTML can make or break your site. The way it’s delivered and structured determines how quickly the browser renders a webpage and what quality the rendering will be. With that in mind, we determined that reducing the amount of data that gets delivered with the HTML file allows the browser to start reading the HTML sooner, and that following best practices for document structure help the browser read it faster.

Here are the HTML optimization recommendations made in this article (the TL;DR):

And as always, test changes before you make them!

<< Part 1: How to Optimize Images to Improve Web Performance

< Part 2: How to Optimize CSS for Better Web Performance